Funeral homes are now looking for something that would make them stand out among many others. Sometimes a broad selection of caskets or the impeccable appearance of modern caravans is not enough. A casket lowering device is in a sense a final touch, complementing the range of services and products offered by a funeral home aspiring to become a professional one.

Coffin lowering machines not only make work during funeral services easier, but also significantly contribute to raising the quality of services. When used during a funeral, a coffin lowering device increases the service’s dignity and solemnity. The devices are intended for use both with coffins and urns. The lowering machine is made out of stainless, acid-resistant steel, bronze, and aluminium. Thanks to that the devices are corrosion-resistant, very precise, and quiet.

The pioneer in production of coffin lowering devices is the Frigid company, based in Northlake, Illinois. That’s where the first prototype of such a device was created in 1916; one that has been developed ever since. Today, the flagship product offered by Frigid, known throughout the World, is the American-pattern coffin lowering device. Its most important characteristics are: highest workmanship quality, ease of handling and assembly, reliability, and very elegant form.

Coffin lowering devices distributed by FINERO are gravitational devices. They operate using the universal law of gravitation. Thanks to this, they do not require additional power sources like batteries or motors. The mechanism is based on centrifugal assemblies and gearboxes. This in turn lowers operating costs of the device and guarantees its durability and longevity. 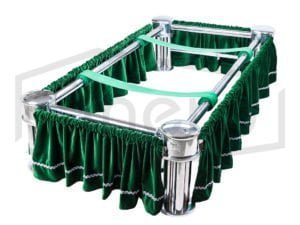 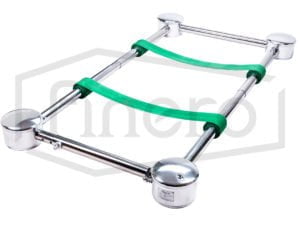 Contact us for current price. Master casket lowering devices are designed in a way which ensures a long work span. They do not have any engines and batteries which are prone to unreliability and awkward to operate. Their operation is based on a system of centrifugal mechanisms and gears. The base of the lift is made out of acid-proof steel. The heads are cast aluminum (50 mm thickness). The dimensions are adjustable to allow for lowering of big caskets. The lowering device works in the same way no matter the weather. The centrifugal mechanism ensures a steady speed of lowering regardless the weight (up to 360 kg). Lowering time for a standard sized casket is about a minute. The depth of lowering is dependent on the straps used.
Read more